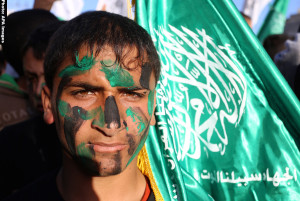 A Palestinian youth holds Hamas movement flag during a rally to condemn the decision of an Egyptian court to ban the armed wing of Palestinian Islamist movement, near the Rafah border between southern Gaza Strip and Egypt on February 5, 2015. Since Egypt's military ousted Islamist president Mohamed Morsi in 2013, the authorities have accused Hamas of aiding jihadists who have waged a string of deadly attacks on security forces in the Sinai Peninsula. Photo by Abed Rahim Khatib