About the initiative: Six Palestinian civil society organizations (CAC- Al-Quds University, JLAC, the Society of St. Yves, Al-Haq, BADIL and al-Shabaka) collaborated with Visualizing Palestine to create a series of visuals on the situation in East Jerusalem. The graphics aim at raising awareness of Israel’s apartheid policies in the city, its effects on the Palestinian population, and the gross violations of international humanitarian and human rights law that arise.

The First Visual “Living under policies of colonization in Jerusalem”

East Jerusalem is considered an occupied territory. Under international law, the de facto annexation by the Israeli government is considered illegal. Throughout its occupation, Israel has enacted discriminatory legal and political policies to diminish the presence of the Palestinian population in East Jerusalem. Israel has engineered a clear governmental policy that sought to maintain a demographic balance of 60 percent Jews to 40 percent “Arabs” within the Israeli declared boundaries of the Jerusalem municipality - which it unilaterally declared as the unified capital of Israel in 1980.

The first infographic provides an overview of the discriminatory Israeli policies that target Palestinians in East Jerusalem, as well as others that seek to unlawfully increase the Israeli settler population in the city. Such measures include: the center of life policy; the 2003 Nationality and Entry Law; the absentee property law; a discriminatory building permit regime; and the law of return. Under the umbrella of all these “legal” policies, Israel is creating unbearable living conditions for the Palestinian population and is engaging in their silent forcible transfer. Punitive measures specifically targeting the Palestinian population of East Jerusalem include:

In parallel to Israel’s punitive measures, Palestinians in East Jerusalem and other parts of the West Bank and the Gaza Strip are physically isolated from each other. Through imposing a comprehensive closure system on Palestinians in the Occupied Palestinian Territory (OPT), Israel aims to consolidate its control over Jerusalem and attempts to completely sever it from the rest of the OPT. 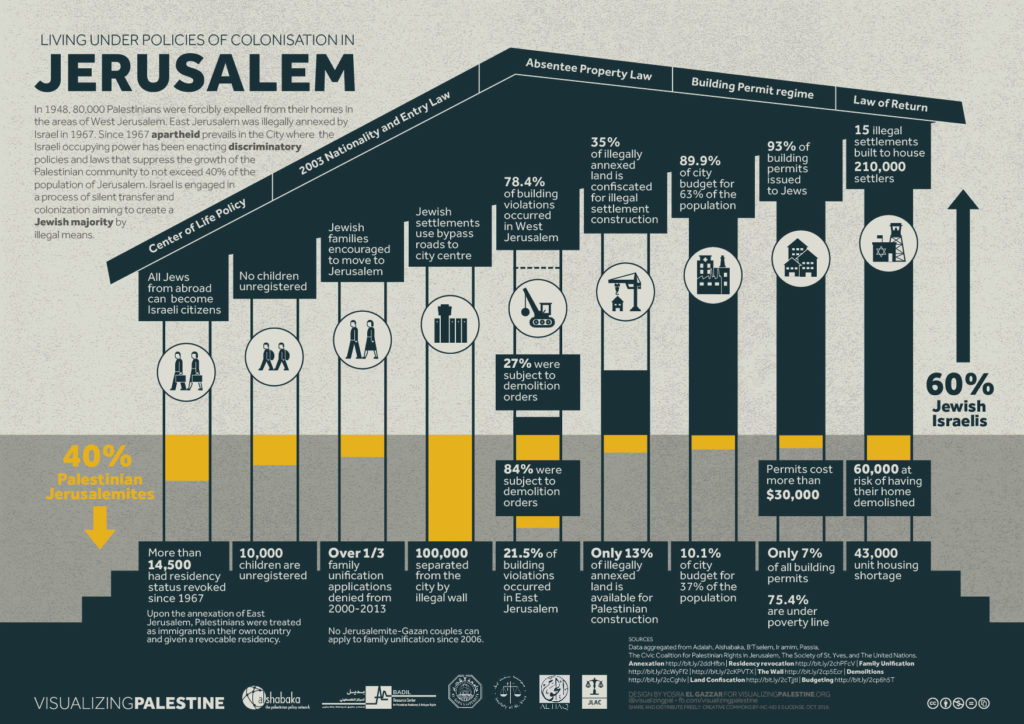 Al-Shabaka, The Palestinian Policy Network, is an independent, non-partisan, and non-profit organization whose mission is to educate and foster public debate on Palestinian human rights and self-determination within the framework of international law.