Under international law, East Jerusalem is considered an occupied territory and the de facto annexation of the city by the Israeli government is considered illegal. Throughout its occupation, Israel has enacted discriminatory laws and policies to diminish the presence of the Palestinian population in East Jerusalem. By granting Palestinians a “permanent” residency status to live in Jerusalem, entry into and residency in Jerusalem becomes a revocable privilege, instead of an inherent right.

1967-1995: A Palestinian can lose his or her residency status by “living outside Israel” (and East Jerusalem) for a period of seven years, or by receiving the status of resident or citizen in another country.

1995-ongoing: The aforementioned criteria were broadened so that Palestinians may lose their residency status by moving their “center of life” outside of Israel or East Jerusalem, even if they were residing abroad for less than seven years and did not obtain residency status or citizenship from a foreign country. If individuals reside in the West Bank (excluding East Jerusalem) and the Gaza Strip, Israel considers it as though they are “residing abroad” and can revoke their Jerusalem residency status. Since the implementation of this policy in 1995, Israel has revoked more than 11,500 residency statuses.

2006-ongoing: In addition to the center of life policy, the Israeli Minister of Interior also began punitively revoking the residency status of Palestinians on the basis of a “breach of allegiance.” Consequently, Palestinians who have never left Jerusalem become vulnerable to residency revocation.

Residency revocations, including punitive revocations, flagrantly violate international humanitarian law and international human rights law. Revocation of residency leads to forcible transfer, a war crime2 under the Rome Statute of the International Criminal Court and a grave breach of the Fourth Geneva Convention.3 As the revocation forms part of a widespread and systematic policy to transfer the protected Palestinian population, it may also amount to a crime against humanity.4

About the Initiative: Seven Palestinian organizations (CAC-Al-Quds University, JLAC, the Society of St. Yves, Al-Haq, BADIL, the Civic Coalition for Palestinian Rights in Jerusalem and al-Shabaka) collaborated with Visualizing Palestine to create a series of visuals on the situation in occupied East Jerusalem. The graphics aim at raising awareness of Israel’s apartheid policies in the city, its effects on the Palestinian population, and the gross violations of international humanitarian and human rights law that arise as a result of such policies. 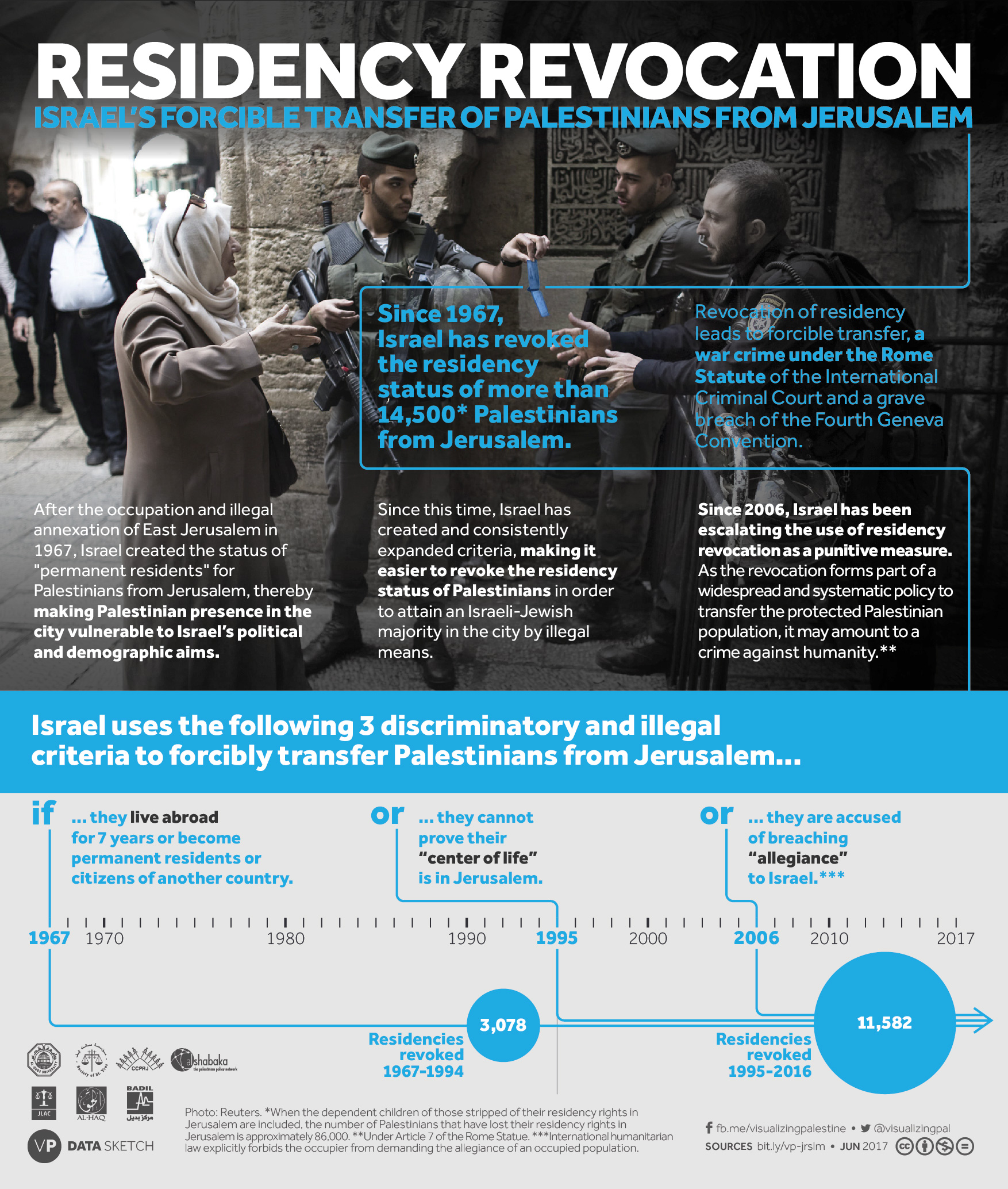 Al-Shabaka: The Palestinian Policy Network is an independent, non-partisan, and non-profit organization whose mission is to convene a multidisciplinary, global network of Palestinian analysts to produce critical policy analysis and collectively imagine a new policymaking paradigm for Palestine and Palestinians worldwide.