The ICT sector is a pillar of all other economic sectors, and thus enables and enhances various dimensions of social and economic development. Indeed, the ICT sector has helped drive the limited development possible in Palestine under prolonged military occupation, accounting for roughly 5.6% of GDP. However, the ICT sector in the Occupied Palestinian Territory (OPT) has faced severe constraints due to Israeli restrictions.

According to the Hague Regulations and the Fourth Geneva Convention, Israel has an obligation to allow the development of the territory under occupation – and under no circumstances can it benefit from the occupation. At the present time, communications technology is so vital to human development it has been defined as a human right.

Despite its obligations under international law, Israel has seriously constrained access to the electromagnetic spectrum. The Palestinian mobile company, Jawwal, serves more than 2.5 million customers with a spectrum nearly one eighth the spectrum Cellcom Israel Ltd uses for some 3 million subscribers.

Hitherto, Israel withheld additional frequencies in the Second Generation (2G) band from Jawwal and Wataniya Palestinian mobile operators, and has not released those required for Third and Fourth Generations systems and services (3G and 4G). By contrast, it released 4G mobile broadband radio frequencies (including those covering the West Bank and Gaza Strip) to six Israeli companies back in January 2015.

For decades, the prohibited access to these services has resulted in severe technological barriers to Palestinian companies. GPS, Paypal, and other mobile applications that users in other countries take for granted are not available through Palestinian providers. 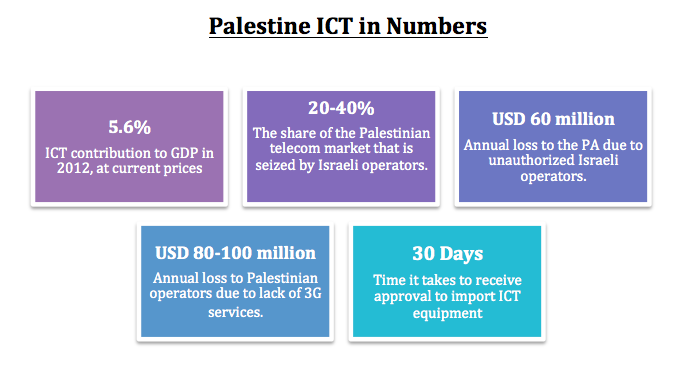 Palestinians have been denied the right to build a Palestine-based international gateway in contravention of resolutions 12, 18 and 125 of the International Telecommunication Union (ITU). Israel has allowed for three fiber optic cables and two microwave links between the West Bank and the Gaza Strip, making it difficult to create an independent Palestinian telecommunication network.

The infrastructure in Gaza itself is completely dependent on Israel. The only fiber optic cable that connects Gaza with the world is placed in Israel. All calls must be routed through Israel, thus rendering Gaza a space of control and surveillance, as seen during Israel’s assault on Gaza in the summer of 2014.

The lengthy process of testing standards compliance and security checks imposed on Palestinian importers of ICT equipment has been a major obstacle to ICT development. Moreover, Palestinian importers are bound by an Israeli-defined “dual-use items” list, prohibiting or placing obstacles to the import of equipment used for communications or network infrastructure.

Severe Israeli restrictions on the freedom of movement of people in the OPT through a hermetic system of physical, institutional, and administrative barriers are another major obstacle to ICT development. These restrictions affect the ICT sector simply by making it harder for those working in it to travel within the OPT and between the OPT and the rest of the world, affecting access to universities and exchanges with experts overseas, among other constraints.

The Way Ahead for Palestine’s ICT Sector