The Palestinian shepherds in the Auja region of the Jordan Valley were scared. Living under Israeli occupation and harassed daily by both the Israeli army and Jewish settlers, they wanted to herd their sheep across the green, rolling hills.

On the day I recently visited, the Palestinians were alone and exposed to the unpredictable whims of young Jewish soldiers.

Situated next to the illegal Israeli outpost Einot Kedem, Palestinian shepherd Ahmed wore a black balaclava to keep him warm on a cold, winter morning. As soon as he appeared with his sheep near the outpost, four armed female soldiers drove up in their green jeep to tell him that he was in a “closed military zone”, a policy that’s routinely used to keep Palestinians and Israeli activists away from land illegally taken by the military or settlers. Ahmed was told by the army to move quickly to find a different path.

Israeli activist Guy Hirschfeld, one of the most prominent dissidents operating in the West Bank to defend Palestinians against Israeli aggression, swung into action. He drove his four-wheel drive towards the soldiers and verbally confronted them.

Initially, the soldiers were relatively friendly, posing for a photo and knowing it would be posted on Facebook, but the mood quickly soured.

Hirschfeld demanded to see the closed military zone order in black and white, so the women sped away back to their base and returned shortly after with the document.

Hirschfeld was told that he wasn’t allowed to be in the area and had to move or face likely arrest by the Israeli police. He insisted to the soldiers that they were doing the bidding of the nearby settlers, “terrorists” he called them, who remained invisible throughout the entire day, and since the outpost was illegal under Israeli and international law, they were obliged to allow the shepherds free passage.

Instead, over the coming hours, the soldiers drove perilously close to the sheep, nearly physically hitting them, some of whom were pregnant. Hirschfeld attempted to stop them by filming their actions, driving his car close to theirs and speaking to the Palestinians about the best ways to avoid arrest. He told me that the soldiers were operating outside the closed military zone and their actions towards the shepherds were violating the law.

Direct action is what Hirschfeld undertakes every day in the Jordan Valley. Working with the Israeli anti-occupation group Ta’ayush and others, he’s one of very few Israelis who have dedicated their lives to opposing the occupation with their bodies.

He’s been arrested at least 70 times, and his Facebook posts have brought him a large following within Israel, the settler movement and Palestine. Hirschfeld is undeniably provocative, accusing the soldiers of illegality and trying to make them feel guilty for what they’re doing in the name of the state and supposed security.

Such troubling interactions in the field were a daily dance between activists, Palestinians, settlers and soldiers, everybody knew their role and who had the power, but it existed in a legal black hole where Palestinians were systemically kicked off their lands by policies decided by the Jewish, Israeli elites.

The landscape in the Jordan Valley is spectacular at this time of year with flowers bursting through the soil and small rocks dotting the ground. There are barely any trees or natural cover from the elements, so the Palestinians, settlers, soldiers and activists are all living under the vast, open sky.

According to a 2011 poll, most Israelis didn’t know that the Jewish state was occupying the Jordan Valley. With few settlers and sparsely populated, the Israeli government aims to increase the number of Israeli colonists from around 6,000 to 10,000 people; this has allowed some of the more ideological and extreme Jewish settlers to operate with impunity.

An estimated 622,670 Jewish settlers are living illegally across the entire West Bank.

On the day I visited the Jordan Valley, Hirschfeld told me that the Israeli army was more brutal than he usually saw, perhaps the result of four female soldiers wanting to show that they could be as tough as the men, if not more so.

During one verbal altercation between Hirschfeld and a female soldier, who said that her grandparents were Holocaust survivors, she argued that it was “leftists like you [Hirschfeld] who are the problem and causing terrorism.”

Later in the afternoon, the Israeli soldiers arrested another shepherd, Mohammed, and I saw him being held with his hands and eyes bound. He was on his knees while two, armed female soldiers watched over him. Mohammed was transferred to the nearby army base, an image of Batman was painted on the outside wall, but he was only held for a short amount of time.

Hirschfeld told me that this was because he had streamed the scene on Facebook Live of Mohammed kneeling on the ground and commanders in the Israeli army followed his feed, saw it was an illegal arrest and demanded he was released.

Although young soldiers in the field often operate with haste and blind hatred towards Palestinians, Hirschfeld said that others higher up the military hierarchy were sensitive about the army's image in the media. His Facebook Live footage proved that the arrest of Mohammed was illegal, he was not inside a closed military zone, so the commander moved quickly to rectify the problem. Despite this, Mohammed could be arrested the following day again.

As Hirschfeld was about to head back to Jerusalem, his car was suddenly stopped on the road by at least eight Israeli soldiers and police. There was a long discussion about whether he should be arrested with the female soldiers trying to convince the policeman to do so. That day, at least, he was eventually free to go home.

Writing about this area in the Jordan Valley in 2017, Israeli journalist Amira Hass explained that, “anything goes when the IDF is obeying its settler masters and is fulfilling the sacred mission of expelling Palestinian shepherds from their pastureland.”

The Israeli election is in full swing with Prime Minister Benjamin Netanyahu recently forming a coalition with the most extreme fascists on the political map. His desperate need to join with the Jewish Power (Otzma Yehudit) party is a worrying indication that Netanyahu will do anything to hold onto power after ten years in the top job. He was just indicted on numerous corruption charges.

Jewish Power has its roots in the ideological obsessions of murdered Rabbi Meir Kahane: he believed in Jewish ethnic purity, forcibly expelling all Palestinians and living under religious, Jewish law.

Although such views aren’t shared by the majority of Israeli Jews today, the idea of kicking Palestinians off their lands is now expressed by growing numbers of mainstream politicians and the general public.

The dark echoes of Kahane resonate loudly in today’s Israel. The leading Israeli opposition coalition proudly talks about not forming a government with Arab parties.

Jewish Power is so extreme that even some of Israel’s biggest US supporters recently expressed opposition to the Netanyahu partnership. The group’s election manifesto includes supporting “total war” against “Israel’s enemies” and bringing more Jews to Israel to battle what it views as the evils of assimilation.

The most viable alternative to Netanyahu is the newly formed coalition between former IDF Chief of Staff Benny Gantz and former TV presenter Yair Lapid. The Blue and White Party has immediately attracted high poll numbers and is the first serious challenge to the Netanyahu era. The party released its proposal for 'peace' with the Palestinians, and it amounts to little more than demands for the occupied to capitulate to Israeli demands.

Israel’s Central Elections Committee banned one of the two Arab parties from running in the election, in a decision that may be overturned by the Supreme Court though it was supported by Netanyahu, while allowing a far-right candidate to stand. It spoke volumes about the endemic racism in the Jewish state.

Leading Israeli journalist Gideon Levy is sceptical that there’s much difference between the two political parties. He recently wrote:

“The election campaign is being waged between those who want to expel the Palestinians (Otzma Yehudit) and those who merely want to hide them behind a high wall (Lapid). Population transfer and race theories versus separation. Your choice.”

In lieu of representation, resistance will increase

In the Israeli narrative, Palestinians are primarily framed as a nuisance that many Israelis hope would simply disappear. The Palestinians are also politically disenfranchised. With close to 6.5 million Palestinians living under occupation, only around 1.5 million, or less than one in four, has the legal right to vote in Israeli elections.

Palestinian citizens of Israel are surveilled and threatened. That’s the real scandal of this election, far more than whether Netanyahu is guilty of corruption, and yet it’s barely mentioned in the local or global media. Netanyahu’s Likud party and other right-wing parties recently pledged to settle two million Jews in the occupied West Bank.

Nadia Hijab, a co-founder of Al-Shabaka, The Palestinian Policy Network, told TRT World that the only viable Palestinian response to this grim picture was to continue and increase resistance across the West Bank including in areas controlled by the Palestinian Authority (PA). Many Palestinians now openly complain of the PA’s complicity with the Israeli state.

“The most effective response in PA-controlled areas (where the PA prevents peaceful mobilisation and resistance on behalf of Israel) has been in small locales such as Nabi Salih & Khan al-Ahmar”, Hijab said, “and these should be upheld and replicated to the extent possible. The Great Marches of Return in Gaza have also spotlighted Israel’s violations of Palestinian rights internationally as has Palestinian resistance in Jerusalem around Al Aqsa.”

Hijab urged a more significant role for Diaspora Palestinians in working together with civil society actors to pressure foreign governments “to hold Israel to account as well through direct action tools like boycotts and legal action. All eyes should focus on Hebron now that the population is at the settler’s mercy after the withdrawal of foreign observers from The Temporary International Presence that has been in place since 1994.”

I asked Hijab if any of the leading Israeli candidates gave her hope for the future, but she was pessimistic.

“The Israeli political spectrum is agreed on maximum territory for Israel while squeezing Palestinians into the slivers that are left,” she responded.

“Any differences between them are largely ones of presentation, not substance.”

With the failure of the two-state solution to bring any suitable outcome that works for both Israelis and Palestinians, the challenge for Palestinians now is what should be the strategy moving forward.

The European Union is notoriously ineffective in pressuring Israel. The Trump administration is set to release its long-awaited 'deal of the century' after the April poll. Few details have leaked but it’s likely to include considerable concessions to the Israeli side, and the PA has already rejected it.

Trump advisor Jared Kushner recently said that his plan would finalise Israeli borders and Palestinian unity (whatever that means in practice). However, Washington has signalled its intentions by cutting all aid to the Palestinian territories. This is hurting vulnerable Palestinians in the West Bank and Gaza, especially women.

Hijab said that the Palestinians currently had little power to “achieve the solution they want, whether they aspire to one or two states. The answer is to stay on the land and continue to work for Palestinians rights to freedom from occupation, equality for Palestinian citizens of Israel, and justice for refugees and exiles until they and their allies are able to shift the power dynamic.” 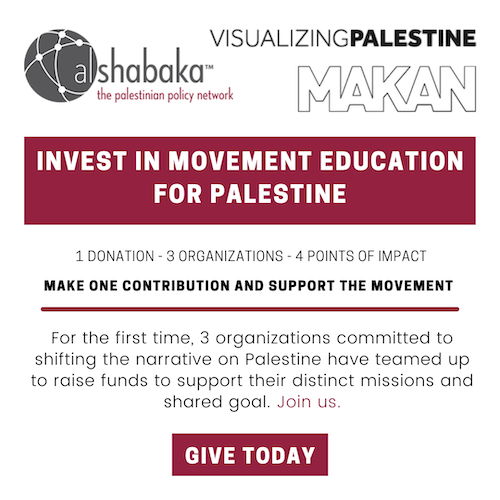