In her new edited volume, Rethinking Statehood in Palestine: Self-Determination and Decolonization Beyond Partition, Al-Shabaka policy analyst and Associate Professor of Political Economy at the University of Massachusetts Boston, Leila Farsakh, brings together a diverse group of intellectuals to critically engage with the meaning of Palestinian statehood. By going beyond partition, which fundamentally underpins the two-state solution, Farsakh and the contributing authors show that the components of Palestinian statehood, including citizenship, sovereignty, and nationhood, must be articulated within the context of decolonization.1

As Farsakh argues in the book’s introduction: “Decolonizing Palestine would require articulating the components of a new political framework that acknowledges the violence and injustices of the past and the present while prioritizing citizenship rights over territorial sovereignty.” But how can Palestinian self-determination be envisioned outside of the notion of territorial sovereignty and nation-statehood? This, Farsakh points out, is an ongoing question with which Palestinians everywhere will continue to grapple.

With the death of the two-state solution and the failure of the Palestinian Authority (PA) to bring about liberation and justice, how can Palestinians in the West Bank, Gaza, 1948 territories, and the diaspora reimagine their self-determination outside of the nation-state framework? Which alternatives exist and what are the challenges they might present?

Al-Shabaka sat down with Farsakh to discuss the findings of her groundbreaking book, and to delve into what rethinking Palestinian statehood actually looks like.

Palestinian attachment to statehood stems from the fact that it affirms the right to self- determination, and thus Palestinians’ right to determine their political destiny and affirm their existence as a nation. Israel has been denying this right since 1948. Statehood became a central goal of the Palestinian national movement after the 1967 war and UN resolution 242 of November 1967. This resolution, which became the basis for peace settlements between Israel and its neighbors, stipulated that Israel retreats from “territories occupied in the recent conflict” in exchange for “acknowledgment of the sovereignty, territorial integrity and political independence of every State in the area.” But the resolution did not mention the Palestinians or any of our rights that are protected by UN resolutions 181 and 194.

Palestinians must articulate how we will devise a new political strategy that unifies our community, including refugees and those living inside 1948 territories Click To Tweet

Then, in 1971, the Palestine Liberation Organization (PLO) defined its goals as the establishment of a Palestinian state inclusive of Christians, Jews, and Muslims within historic Palestine. In doing so, it posited that the only way for Palestinians to return home and liberate their land from Zionist settler-colonialism was through the establishment of a Palestinian nation-state. In this respect, the PLO was not different from most liberation movements in the twentieth century, which associated liberation from colonialism with the creation of independent nation-states.

The Palestinian claim to statehood has been supported by the Arab League since 1974. And both the 2002 Arab Peace Initiative and the 2003 Road Map to Peace affirmed that the creation of an independent Palestinian state in the 1967 occupied territories was not only legitimate but the only means to end the so-called Israeli-Palestinian conflict.

But the failure of the Palestinian state project to bring about liberation stems from two main facts. The first is the PLO’s acquiescence to the partition paradigm, championed by the international community since 1947, as the only means to solve the conflict. In 1988, the PLO gave up its goal of establishing a democratic state in all of Palestine in favor of a Palestinian state in the West Bank and Gaza as its symbolic declaration of independence. The second factor lies in Palestinian acceptance of negotiations with Israel on the basis of the 1993 Oslo Accords, instead of confronting Zionism and demanding, in the least, full Israeli withdrawal from the occupied territories.

This “peace process” reformulated rather than ended Israel’s colonial structure of domination. It allowed Israel to put Gaza under siege for over 15 years and to nearly triple the settler population in the West Bank, including East Jerusalem, from 250,000 Jewish Israelis in 1992 to nearly 700,000 in 2020. It also fragmented the Palestinian political entity with the creation of the PA that de facto superseded the PLO, compromising Palestinian liberation and the right of return in the process. The Palestinian state was thus bound to be neither viable nor sovereign, despite being recognized by 138 states.

The different chapters offer alternatives to the state project. What are some of the challenges that Palestinians must overcome in order to bring about a viable alternative to partition?

My book argues that Palestinians need to move away from the partition paradigm, or the two-state solution, in any attempt to fulfill their rights. Some Palestinians believe that the pursuit of statehood should be abandoned altogether, since the state remains, in essence, a violent and repressive political entity. They argue instead that the politics of sumud (resilience on the ground) and grassroots mobilization affirm Palestinian indigeneity. Others, including myself, argue that the alternative lies in redefining the state rather than imagining that it can be transcended. It needs to be contained by making it democratic, inclusive, and accountable to its citizens. 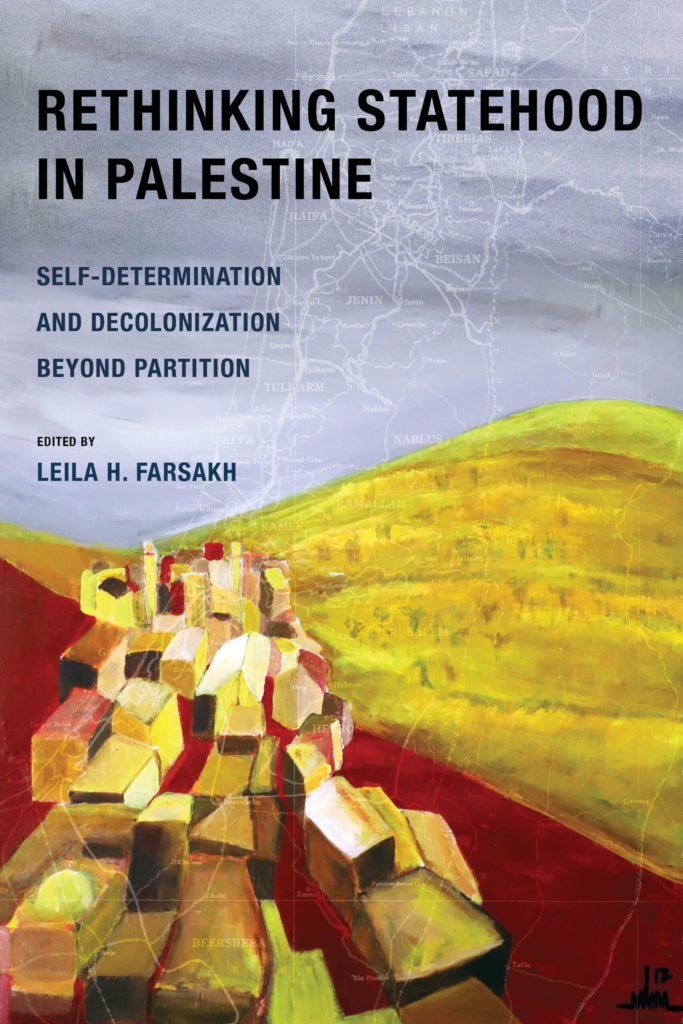 The challenge facing Palestinians lies in defining the shape of the democratic state they want to create and in devising a political strategy to generate local, regional, and international support for it. The challenge in this regard is not only legal or constitutional—defining whether the democratic state in historic Palestine will be a federal, confederal, binational, or unitary state—but, above all, it is political. That is, Palestinians must articulate how we will devise a new political strategy that unifies our community, including refugees and those living inside 1948 territories. We must also articulate the economic, political, and legal steps that need to be taken to dismantle the apartheid colonial structure Israel created in order to build a new political order.

This means that Palestinians need to confront the question of Zionism, rather than abstract it as the Oslo process did, and to explain how Israelis and Palestinians can be equal citizens within a democratic state. There is much to learn from South Africa in this regard, even if it did not resolve the persisting problem of economic inequality. Building a liberated future for Palestine entails dismantling colonial privileges and structures of domination as much as it entails defining the rights of Jews or Israelis who want to remain in Palestine as equal citizens, without stripping them of their identity or compromising the Palestinian right of return, which is protected under international law.

In your chapter, you stress the importance of rearticulating the relationship between the nation and the state. Why do you believe this is important, and what would it signify for statehood across historic Palestine?

Since 1918, when Woodrow Wilson internationalized the concept of self-determination and laid the foundations of a world order composed of nation-states through his Fourteen Points, the nation and the state have been intrinsically linked, when in fact they do not need to be. The nation-state has proven to be problematic, since it is bound to exclude those who do not belong to the nation. It is inevitability discriminatory, especially when it is not democratic and whenever it defines citizenship on the basis of ethnicity rather than territorial residency rights. As Mahmood Mamdani argues, the nation-state is a part and parcel of colonialism. It inevitably produces natives and settlers, and nationals and outsiders, who are unequal in rights and powers.

The state is fundamentally a juridical and political order that is territorially delineated. The nation, on the other hand, is a more expansive term used to define a body of people with shared characteristics, whether historical, ethnic, cultural, or otherwise. The term nation also encompasses a given people’s right to self-determination. This right does not need to be territorially confined, since sovereignty lies with the people.

The only way to decolonize Palestine is thus to move away from the nation-state as a model of statehood or a goal of liberation. As the experience of the past 30 years has demonstrated, the creation of a truncated Palestinian state within the framework of partition has excluded Palestinian refugees and Palestinian citizens of Israel from the definition of the Palestinian nation. At the same time, such a state is not democratic and cannot protect the citizenship rights of Palestinians in Gaza or the West Bank. Only by collectively constituting a democratic state that ensures the equal rights of all of its citizens, irrespective of their ethnicity, can we guarantee that people’s rights are protected and their freedom ensured.

The juncture in which the Palestinian cause finds itself today suggests that the Palestinian citizens of Israel are well placed to play a central role in leading the liberation struggle, just as the refugees did in the aftermath of the 1967 war, and as the Palestinians in the West Bank and Gaza did with the First Intifada in 1987 and during the Oslo process. The Palestinian citizens of Israel can fill this role largely because the two-state solution has failed and the alternative moving forward is the creation of one democratic state in historic Palestine, irrespective of whether or not it will be a binational state. They are the ones who best understand the realities of Israeli political structures. They can thus bridge the gap between Palestinians and Israelis in advancing a one-state solution.

This being said, I do not know if the Palestinian citizens of Israel will, or want to, take the lead in the liberation project. It is also important to remember that all Palestinians have a role to play in their struggle for justice and equality, as the ongoing Unity Intifada has clearly demonstrated.

Your book ultimately shows that Palestinians across historic Palestine and throughout the diaspora must agree on a new and collective national project. What should this project look like and what would it entail for existing Palestinian leadership?

Palestinians across historic Palestine and throughout the diaspora agree on the failure of the two-state solution. While some still argue that the Palestinian state project can be saved by reforming the PA, it is clear by now that the statehood project in the West Bank and Gaza cannot protect Palestinian rights and only serves the interests of a small group of Palestinians comprised of the PA and its cronies, as well as regional and global capitalist investors.

The challenge confronting Palestinians moving forward lies in agreeing on a new, collective national project that transcends partition and that is still politically feasible. Such a project cannot be produced, however, without first reviving the PLO and its institutions, given that it is the only representative political structure that includes all Palestinians inside and outside historic Palestine. For this to happen, a new generation of Palestinians needs to take the reign of the PLO and confront the PA, which has marginalized the PLO and abandoned the liberation project.

Al-Shabaka policy analyst, Leila Farsakh, is Associate Professor and Chair of the political science department at the University of Massachusetts Boston. She is the author of Palestinian Labor Migration to Israel: Labour, Land and Occupation (Routledge, 2012), and of Rethinking Statehood in Palestine: Self-determination beyond Partition (California University Press, 2022). She has worked with a number of organizations, including the Organization for Economic Cooperation and Development (OECD) in Paris and MAS in Ramallah, and she has been a senior research fellow at Birzeit University since 2008. In 2001, she won the Peace and Justice Award from the Cambridge Peace Commission.