The Palestinian Authority (PA) adopted donor-driven security sector reform (SSR) as the linchpin to its post-2007 state-building project. As SSR proceeded, the occupied West Bank became a securitized space and the theater for PA security campaigns whose ostensible purpose was to establish law and order. This article tackles the consequences of the PA’s security campaigns in Balata and Jenin refugee camps from the people’s perspective through a bottom-up ethnographic methodological approach. These voices from below problematize and examine the security campaigns, illustrating how and why resistance against Israel has been criminalized. The article concludes by arguing that conducting security reform to ensure stability within the context of colonial occupation and without addressing the imbalances of power can only ever have two outcomes: “better” collaboration with the occupying power and a violation of Palestinians’ security and national rights by their own security forces. 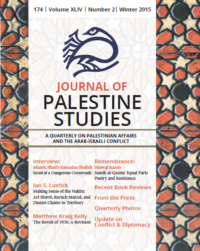